Potatoes were aboard the ship of explorer James Cook when he claimed eastern Australia for Britain in 1770, and their cultivation began along with colonization 18 years later. Today, "spuds" are grown across the continent, from the temperate southern state of Tasmania to tropical North Queensland.

Australian potato production more than doubled between 1960 and 1990 - from 450 000 tonnes to 1.2 million - but since then output has stabilized at an annual average of about 1.3 million tonnes. Potato tubers are the country's most important horticultural crop, accounting for more than 40 percent of total vegetable output. More than 60 percent is processed into frozen potato products and crisps, while around 37 percent is fresh marketed.

Competition from foods such as pasta and rice has made recent inroads into the fresh potato market, and FAO estimates that between 1995 and 2005 annual per capita consumption of potatoes slipped from 55 kg to 53 kg. 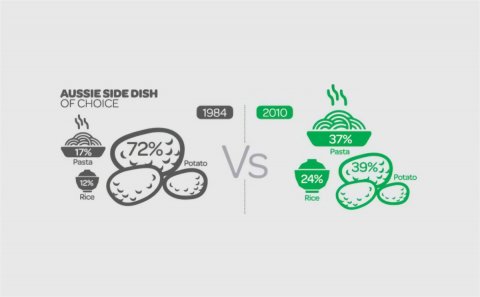 Supermarket chain Woolworths has released a report focused on the changes in the spending pattern of their Australian Shoppers over the past 25 years. The report also highlights the dramatic change in the position of the potato in that shopping cart.
Read more
Australia
Agricultural Statistics Australia
Consumption Statistics Australia

Other Regions in Oceania :